HOUSTON – October 14, 2021 – Atlas Scholars held its first-ever fundraising event, Sunday for Scholars, October 10, 2021, at the Houston Polo Club. The 501c3 non-profit, founded by Craig Taylor and Tejpal Singh in 2014, provides mentorship and internship opportunities for high-potential students of diverse backgrounds in the Houston area to participate in energy and finance-focused professional development. The supporters raised over $140,000 to benefit the expansion of the program in the form of scholarships, admission-test tutoring, mentorship support, and overall reach of the program for high school students beginning the summer before junior year through their third year in college. To date, Atlas Scholars has benefitted 87 scholars and has awarded over $450,000 for scholarships. A three-dimensional pop-art style piece donated by New York’s Joshua Caleb, was auctioned for $11,000.

During the program, Craig Taylor, CEO of Iapetus Holdings LLC and program co-founder, spoke about his inspiration to start Atlas Scholars: “This program means the world to me. Nine years ago, I was sitting in a conference room just feeling very grateful for the life that I have, the career that I found in energy and finance. Neither of my parents graduated from college; I did not have a lot of direction. I found energy and finance later in life. From a position of gratitude, I wanted to make a program for kids who were ambitious and wanted to be successful—but might not necessarily know how to get there, know how to navigate, or have that mentorship—I wanted to be able to offer that to them.”

Jay Mondkar, a scholar graduate from the first year of Atlas’s program, pledged a match donation at the fundraiser. Jay spoke at the event, expressing his gratitude for his classmates, his mentors, and the program overall: “The program really does instill in all of us a decision-making process that, regardless of what you apply it to, it’s incredibly valuable for the rest of your life. Hopefully, it is validating that alums want to be here, want to give back, want to contribute their time, money, and everything. I know I’m here for the long haul and I know that each and every one of you is right there with us the entire time.”

Taylor added: “Gratitude is something that we preach, something that we think about, and then we hope that everyone will have it. This program, for me, has been the biggest gift that I could have possibly given myself, to see other people doing well and it just really makes me feel full in my heart to see these people doing the things that they are doing. Jay was always a special kid. He graduated our program, he went on to University of Texas Business Honors, he went into investment banking. And as a token of his own gratitude, today Jay Mondkar wrote a check for $20,000. That is beyond generous. That kind of thing, seeing these young people go off to school, many of whom are first-generation, first people in their families to go to school, it makes me feel good. I really encourage everybody to give that gift to yourself. If you can help other people without expectation and with no agenda, that’s really the best gift you can give yourself.” 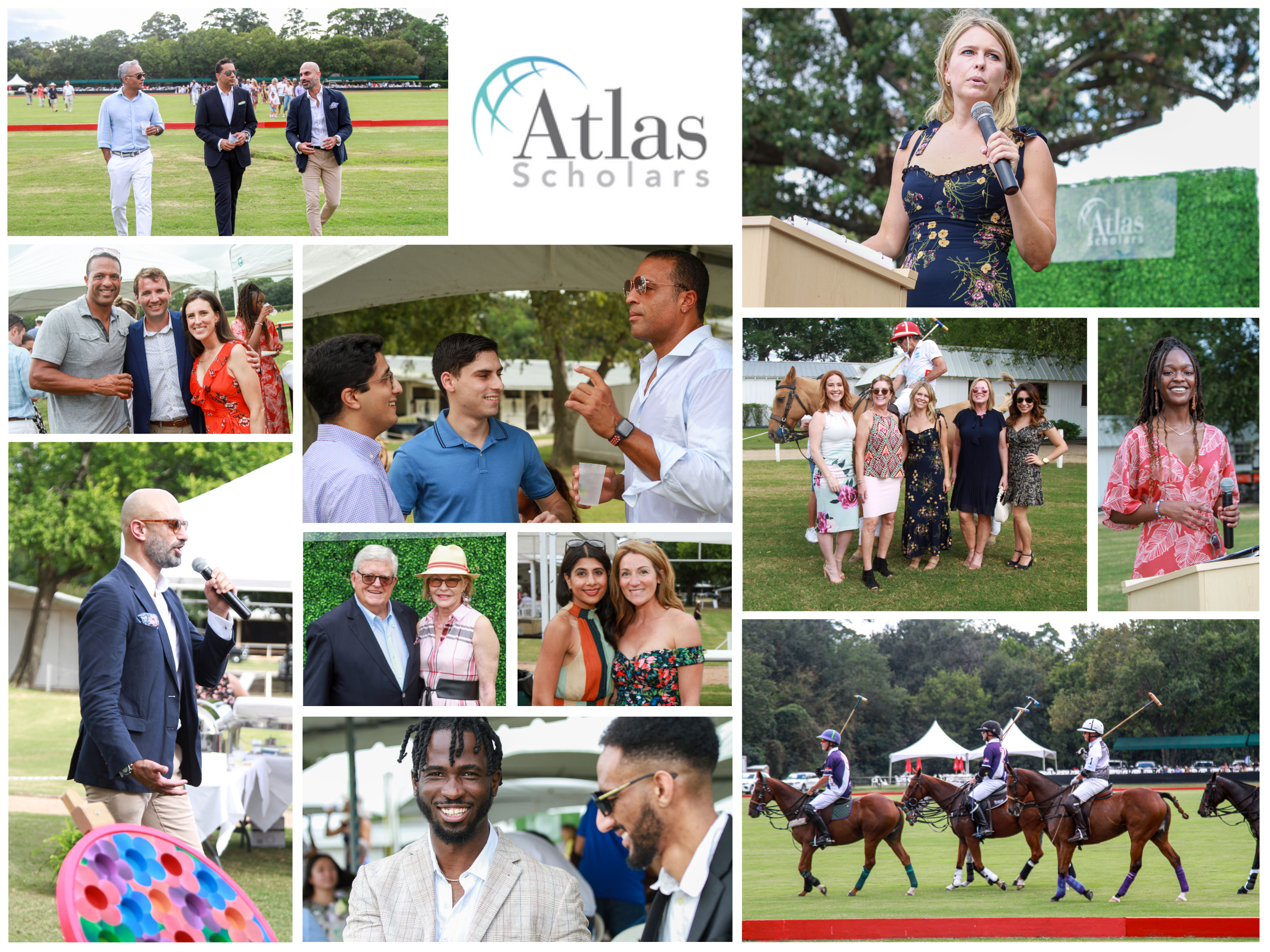 Atlas Scholars Executive Director, Jenna Moon, spoke about the fundamentals the program provides: “Prior to joining Atlas Scholars, I had spent my entire career in public education and while I loved my students and the work I was doing, it was extremely frustrating to see where we were falling short and how many students were graduating high school completely unprepared for the real world. Atlas Scholars is everything I wish I could have provided my students. We are 100% focused on personal growth and development. We designed a program that is intentional about getting students real-world exposure, preparing them for performance-based environments, and providing them with a long-lasting network of support. We designed our program with these things in mind because we believe these are critical pieces for building success in career and in life and are often what’s missing for students who come from low-income environments.”

Co-founder, Tej Singh, expressed his gratitude for the program’s ongoing support. He stated, “I want to take a moment to thank all the supporters of the program who have been there from day one. Some of them couldn’t be here today but they’ve been instrumental in helping us continue to carry out the spirit of the program, the informed decision-making, the touch, and mentorship. We owe so much to Greg Agran, Dylan Seff, Mary Anne Brelinsky. The list is so long… It’s also great to see new faces. I want to do more with the program, we don’t want to ever lose the essence of the program which is making sure that our touch is meaningful, and our impact is there, because that’s ultimately what we care about. Every dollar is aimed at helping support each and every one of these students and watching them be the leaders of tomorrow. I’m super proud of the program.”

Josh Caleb donated the auctioned contemporary-style artwork piece of acrylic on hand-cut wood. Caleb, who exhibited at Art Basel Miami in 2019, has garnered partnerships with Lamborghini for hand-painted commissions, including a Huracán EVO Spyder as well as with Coach, for a line of sneakers and accessories. He sold out his first solo exhibit prior to opening night this past February and is currently showing his second solo exhibit at the Houston Art Advisory. Caleb is known in sports circles as Josh Keyes, for his former Houston Texans linebacker career.

At Atlas Scholars, students from across Houston come together to learn in a competitive and collaborative environment that pushes students to create their own success. The program creates a holistic ecosystem for success through a problem-based learning structure that includes mentorship from industry leaders from a variety of backgrounds and sectors, college and scholarship support, guest speakers, and field trips. Students move on to become leaders at their high schools and universities. 28 high schools and 31 colleges are represented by the current class as well as the 62 Scholars alumni. Regarding the class of 2021, 100%of the students were accepted into selective universities, two Scholars were awarded full ride QuestBridge scholarships, and $72,000 was awarded in four-year scholarships from Atlas Scholars. Program alumni hold positions with leading companies such as KPMG, Amazon, TC Energy, Crumbl Cookies, Lion Fund Capital, J.P. Morgan and Aveva, to name a few. The program’s plan is continued growth in number of beneficiaries, scope, and years of continuous, integral support to program alumni. Atlas Scholars also aims to widen the reach of the program outside of Houston. For more information on applying for the program or board positions, follow us on Instagram and LinkedIn or visit atlasscholars.com.