HOUSTON – November 1, 2021 – Atlas Scholars is the winner of the 2021 GRIT Trailblazer Energy Superheroes Award. This inaugural recognition spotlights affinity groups that help younger professionals through mentorship, outreach programs, or other sustainable events. The award is in honor of the launch of the book, Energy Superheroes, Women in Energy, by Erin Twamley and Joshua Sneideman, coauthored by Katie Mehnert, CEO of ALLY Energy. Their mission is to lead the way to inspire the next generation of “Energy Superheroes”. The event was held at the A.D. Players George Theater in Houston on October 26, 2021. 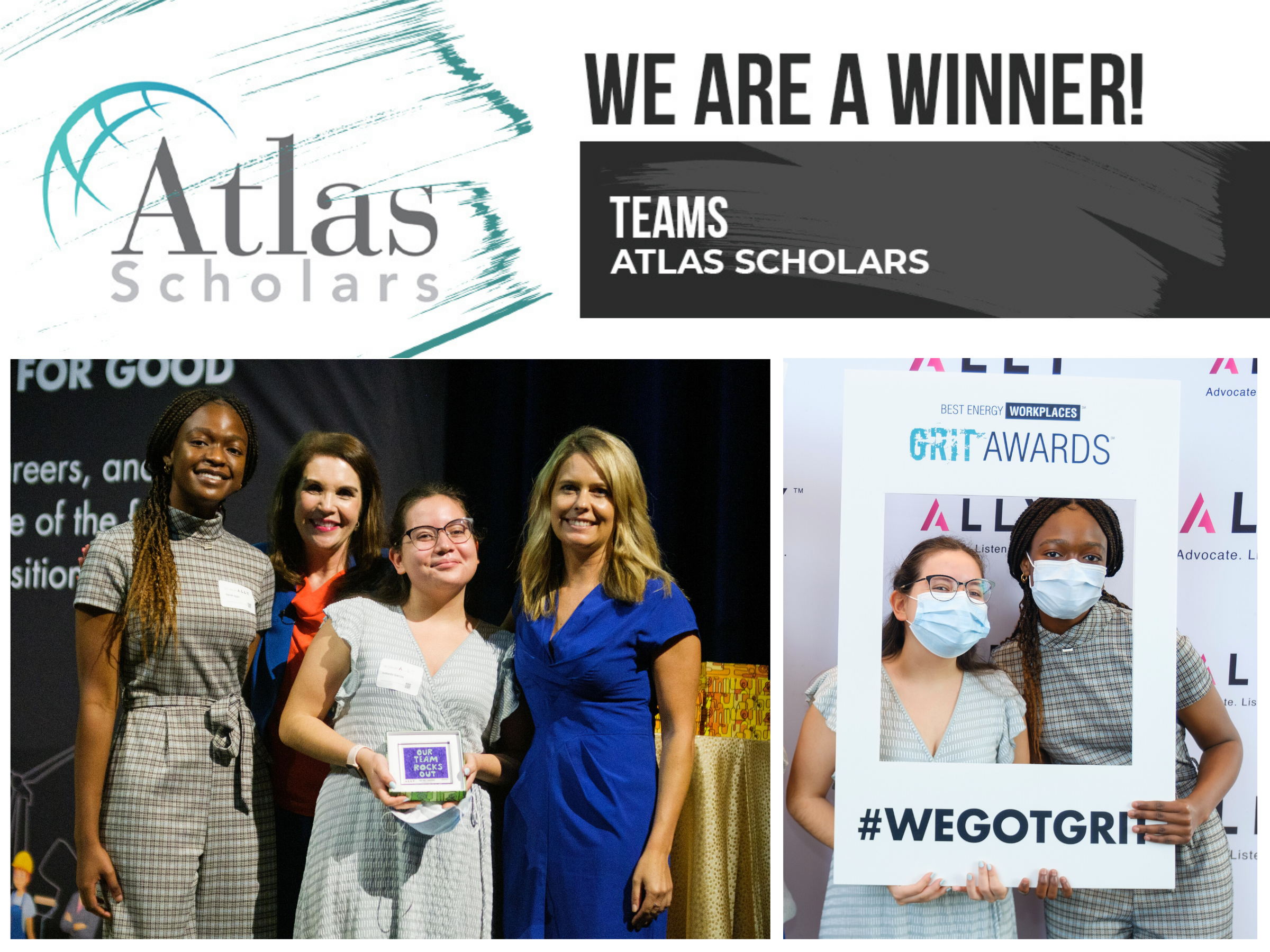 The GRIT Awards are held annually by ALLY Energy, the leading source for diverse energy talent, careers, and culture to celebrate top leaders, teams, and companies powering our world. The organization seeks to find the difference-makers who are making an impact on energy, sustainability, and climate. It highlights teams and affinity groups that have overcome adversity. “GRIT” is defined by ALLY Energy as an acronym for growth, resilience, innovation/new ways of working, inclusion, and talent. Mehnert stated, “It’s an honor to provide this inaugural award to Atlas Scholars. This organization is full of difference-makers and superheroes who will make a huge impact on our future energy system.”

Grit is a founding principle behind Atlas Scholars. Program cofounder, Craig Taylor, commented, “One of the most valuable lessons I have learned in life is about sacrifices. I have a strong belief that anyone can achieve absolutely anything they desire, depending on what they’re willing to sacrifice. I’ve learned to never quit. Stay in the fight! That’s grit. I realize that life isn’t fair; not all starting points are equal. However, I recognize that standing around saying “life isn’t fair” or “that person is more privileged than me” gets us nowhere. Starting to make sacrifices and doing something about accomplishing your goal is what gets you there. In the Atlas Scholars program, we teach the kids to not allow themselves to be defined by where they came from, but rather, by what they accomplish and what they stand for.” Taylor is minority and veteran CEO of Iapetus Holdings LLC.

Isabella García and Sarah Ajao, two high school seniors from the program, attended the event with Atlas Scholars Executive Director, Jenna Moon. García nominated Atlas Scholars for the award. She is aiming to pursue an education in public policy and had this to say: “Both of us were impressed by the panel topics, most importantly, the thought around how to bring together the big players in the energy space to talk about the future. I also loved meeting the coauthor of the book who told us she’s interviewing 26 diverse women in energy to showcase what they do in their careers and how they power our planet.” García’s passion is applying data to environmental decision-making and working towards the goal of transitioning urban cities to become more sustainable.

In the words of Mary Anne Brelinsky, President of EDF Energy North America and board member of Atlas Scholars, “I support Atlas Scholars because I am passionate about bringing more diversity to the energy industry. Through their targeted recruitment process, each class is selected to represent true diversity in terms of gender, ethnicity, background, and life experiences. The diversity of their program is what we hope to achieve in industry, and I believe a program such as this will help us achieve more diverse workplaces faster.”

“As a leader in the energy industry, it is extremely important for me to see programs and organizations investing in developing our local talent and ensuring that young adults have exposure to the many exciting and fulfilling careers in the energy industry. Atlas Scholars has connected EDF Energy with a diverse group of 30 students every summer and provided us with an opportunity to speak directly to students about our role in the global energy transition, the invaluable services we provide, and ways for them to begin thinking about their future majors and potential careers. In addition, Atlas Scholars gives our people the opportunity for meaningful engagement with the community. EDF leaders participate in their visits as guest speakers and have served as individual student mentors”, stated Brelinsky.

Tej Singh, cofounder of Atlas Scholars and Iapetus COO, added, “Our current aim is to grow the program in scope. This means acquiring more access. We currently count on support from EDF, Vitol, Mercuria, Macquarie, and valuable individual donors, yet we’re actively inviting more corporations to join us in leaving a legacy on the next generation of professionals for their pipeline. There are plenty of college internship programs out there and some high school collaborations, yet this program is unique in the sense that the impact it makes on the future professionals is direct, profound, and measurable. The speaker series and the workplace tours are two fantastic opportunities for companies to showcase their work and impact through Atlas Scholars. We are open to hearing your ideas on how to bridge the next generation of diverse changemakers into the future.”

Atlas Scholars is a 501c3 non-profit, founded by Craig Taylor and Tejpal Singh in 2013, that provides mentorship and internship opportunities for high-potential students of diverse backgrounds to participate in hands-on professional development. Sponsorship supports the expansion of the program in the form of scholarships, admission-test tutoring, mentorship support, and overall reach of the program for high school students beginning the summer before junior year through their third year in college. To date, Atlas Scholars has benefitted 87 scholars and has awarded over $450,000 in scholarships. At Atlas Scholars, students from across Houston come together to learn in a competitive and collaborative environment that pushes students to create their own success. The program creates a holistic ecosystem for success through a problem-based learning structure that includes mentorship from industry leaders from a variety of backgrounds and sectors, college and scholarship support, guest speakers, and field trips. Students move on to become leaders at their high schools and universities. 28 high schools and 31 colleges are represented by the current class as well as the 62 Scholars alumni. From the class of 2021, 100% of the Atlas Scholars were accepted into selective universities, two received full ride QuestBridge scholarships, and $72,000 was awarded in four-year scholarships. Program alumni hold positions with leading companies such as KPMG, Amazon, TC Energy, Crumbl Cookies, Lion Fund Capital, J.P. Morgan and Aveva, to name a few. The program’s plan is continued growth in number of beneficiaries, scope, and years of continuous, integral support to program alumni. Atlas Scholars also aims to widen the reach of the program outside of Houston. For more information on applying for the program, as well as offering workplace tours, speakers, or mentorship, follow us on Instagram, Facebook, Twitter, and LinkedIn or visit atlasscholars.com.